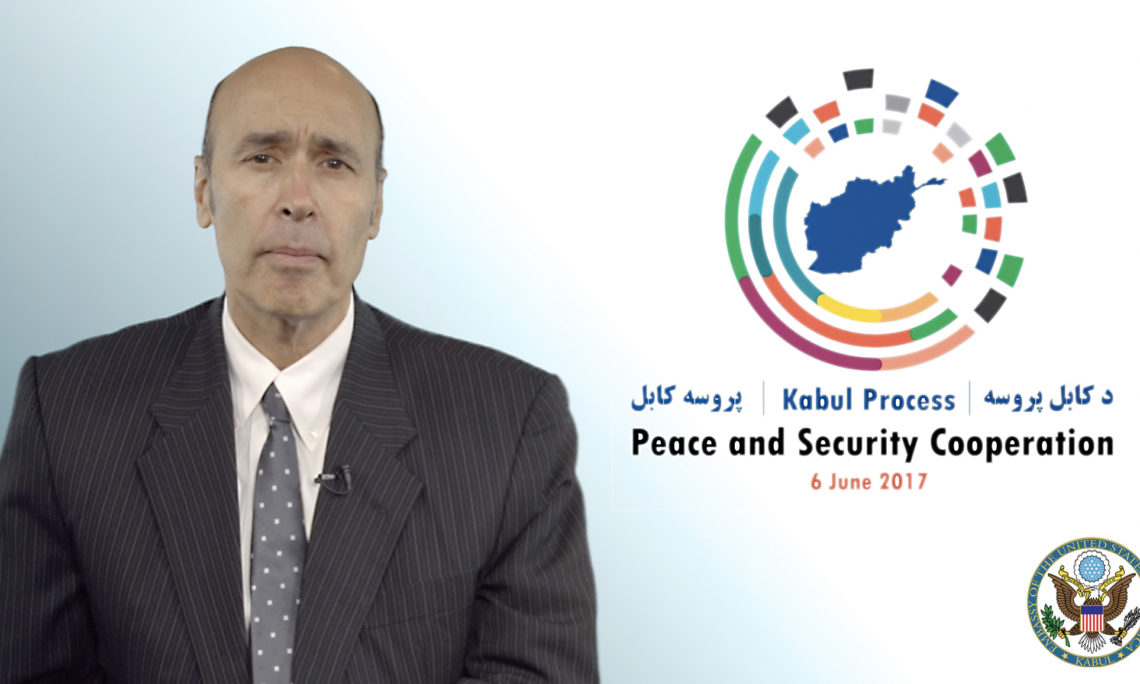 On behalf of the Administration of President Donald Trump and the American people, I want to congratulate President Ghani, Chief Executive Abdullah and the Government of National Unity for yesterday’s historic Kabul Process for Peace and Security Cooperation Conference.  Given the heart-breaking tragedies of the past week, all Afghans showed tremendous courage and determination hosting delegations from 26 nations and international organizations for this momentous meeting.  Global friends of Afghanistan came to Kabul on what was an Afghan-owned, Afghan-led, and Afghan-chaired event to raise our collective voices for peace – a peace that Afghans, sick of four decades of conflict – so desire.  I, along with every American, stand firm with our Afghan friends and partners as we work together, looking forward in the hope of a peaceful tomorrow.

The scourge of terrorism and those who spew poison and hate casts a dark shadow across the world.  From Aleppo to Manchester, from Baghdad to Dhaka, from Paris to Orlando, those who hate have brought suffering to the globe.  No nation has suffered more than Afghanistan at the hands of vicious and criminal terrorists and insurgents. The May 31 truck bomb attack that left 150 dead and 500 injured in the heart of Kabul made clear once again the depravity of those who seek darkness over light.

I again extend my deepest condolences to those who lost friends, coworkers, family, and loved ones during the attack.  We all suffered greatly that day, and our Embassy family was not immune.  We lost 10 of our brave and loyal Afghan security guards to the deadly bombing.  These courageous men, along with their police and military colleagues, stood on the frontline protecting Afghans, Americans, and all those who live and work in the international zone.  We honor their service and will never forget the sacrifice they paid in the name of peace and security.

By gathering in Kabul a week after the attack, we made clear that the terrorists cannot stop the international and regional community from voicing their unequivocal supports for the Kabul process.  The U.S. government agrees that the Kabul Process can provide an umbrella-platform to take stock of and reinforce other diplomatic initiatives, and allow international stakeholders to discuss and commit to firm action to fight terrorism, seek avenues for peace, and promote regional connectivity.

As we pause to honor and remember those we lost, I want to applaud the resiliency, determination, courage, and selflessness of the Afghan National Defense and Security Forces.  These brave men and women sacrifice all so that we can be protected.  We salute your service and I want you to know we are with you 100 percent.

Pain, grief, loss, and sorrow sparked demonstrations on June 2.  Tragically, the demonstration near the site of the truck bomb ended in violence, resulting in death and injuries.  Afghans need to know what happened that day; there should be a full investigation to determine how what should have been an exercise in democratic protest turned so ugly.  Every Afghan has a right and a duty to be part of the process of peace, and society benefits when every member of that society has his or her peaceful voice heard.

The pain of this past week was twisted to a new height with the barbaric and cowardly suicide bombers’ attack on the funeral of the son of Senate deputy speaker Izadyar.  Afghans also need to be informed of the facts relating to how multiple suicide bombers were able to target and assault a solemn funeral service attended by many good people including prominent Afghan  political leaders.

In the end, though, the sheer will to carry forward is what makes the world stand up and admire the Afghan spirit.  The Kabul Process represents bringing the national and regional efforts for stability and peace home to Afghanistan.  While support from all quarters is welcome, the search for peace doesn’t belong in Moscow or Beijing or New York – it belongs here in Afghanistan.  Yesterday’s meeting is just the start of the Kabul Process, and Afghanistan can count on the United States to back its efforts to defeat terrorism and engage with all elements who seek to build a foundation for peace.  The United States fully supports this effort and looks forward to participating in future Kabul Process meetings.  Rest assured, we will never waiver or be intimidated by those who advocate violence and intolerance.

The United States remains a committed partner and friend to the Afghan people. We continue our important work in the areas of: health, education, security, individual rights, illicit drugs, advancing economic opportunities, and most importantly, unity, peace, reconciliation, and a stable Afghanistan free of terrorism.  Americans are with Afghanistan now and in the future.  We look forward to parliamentary elections as soon as possible, and presidential elections in 2019.  Together, we will forge a brighter, safer democratic Afghanistan.