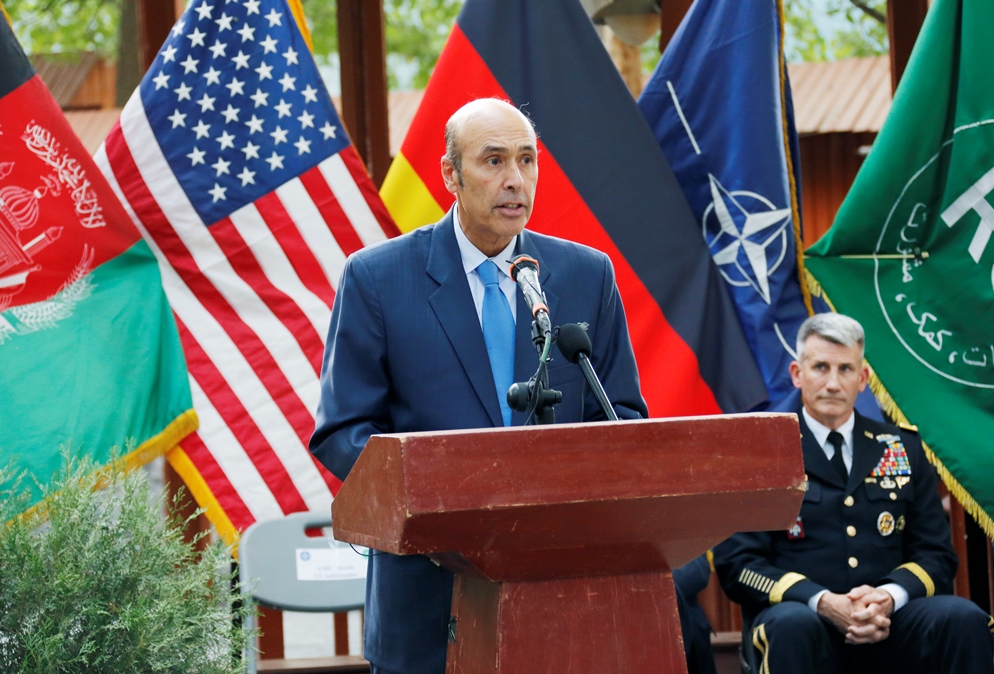 Good evening, General Nicholson, Mrs. Nicholson, my distinguished colleagues and friends, honored guests.  I myself feel the weight of the honor of being invited to speak at this solemn occasion.  As Americans here in Afghanistan, we know too well what we ask of our men and women, many who leave behind their families and homes to come and serve alongside our Afghan friends.  Many who have given their lives here in Afghanistan; our NATO allies as well have sacrificed much.

And it is so with our Afghan friends whom we honor tonight.  On May 31, on a street full of life, commerce, and the bustle of a vibrant society, our enemies descended with hate in their hearts.

They killed more than one hundred and fifty people, and wounded hundreds more, in one of the most destructive and horrific attacks this city has ever seen.  It shook the heart of this great city to its core.  Ten men killed and three injured, for what our adversaries would term a victory.  How wrong they are!

The struggle we face here in Afghanistan is as old as human history.  It is a very elemental struggle.  It is a fight between those forces that empower and liberate people against those who physically and spiritually subjugate their fellow human beings.  The struggle in this heroic land is a fight between the vast majority of Afghans who simply want to rebuild their country and create a better life for their sons and daughters, against a small group of people who are filled with hate and know only the path of violence and destruction.

Let me say I have no doubt that the forces of light, faith and love will prevail, bring peace, and honor to these brave and proud men, and those thousands of brave young Americans, Afghans and of the other allied nations who have fallen in this cause.

We civilized people believe in and follow the arc of human progress, and we are blessed with the gift and talents to forge our own destinies.  The vast majority of Afghans are builders, on the side of progress.  Each and every day we see the progress Afghans have made in such little time since 2001.  The schools, the hospitals, the government buildings, and centers of commerce – cellphones and public services, all accomplished in the past sixteen years – they are physical manifestations of the will of a people who build and believe in peace for themselves and others.

There exists only a very small minority who are destroyers – those who seek to tear down, it seems, for hateful and evil reasons.

But the arc of history is clear – these destroyers cannot prevail, because their ideology is self-destructive, and they will either lay down their arms or meet their end.  These destroyers do not have the vast majority of Afghans on their side.  The vast majority of Afghanistan will continue to build and forge its future, and each time a destroyer comes to assassinate, to bomb, to terrorize, we will bind our wounds, bury our fallen, and rise to build again.  Afghanistan is not alone in this fight.  The United States pledges to see this through to the end and to honor our commitments.  We are not going anywhere.

And so, as we honor our commitment to Afghanistan, let us devote special recognition to these brave heroes who gave everything to save their fellow men.  Their courage and sense of duty possibly prevented a catastrophe at our Embassy and I offer the heartfelt condolences of the Administration of President Donald Trump and the people of the United States.   In these difficult times our prayers go to those martyrs and to the grieving families of these fallen sons from Badakhshan, Parwan, Panjshir, and Kabul.  May you be at peace knowing that our struggle continues, and your sacrifice shall never be forgotten.

It’s an honor to be with the families of such brave men.  I pray my sons will have the bravery of the loved ones you have lost.