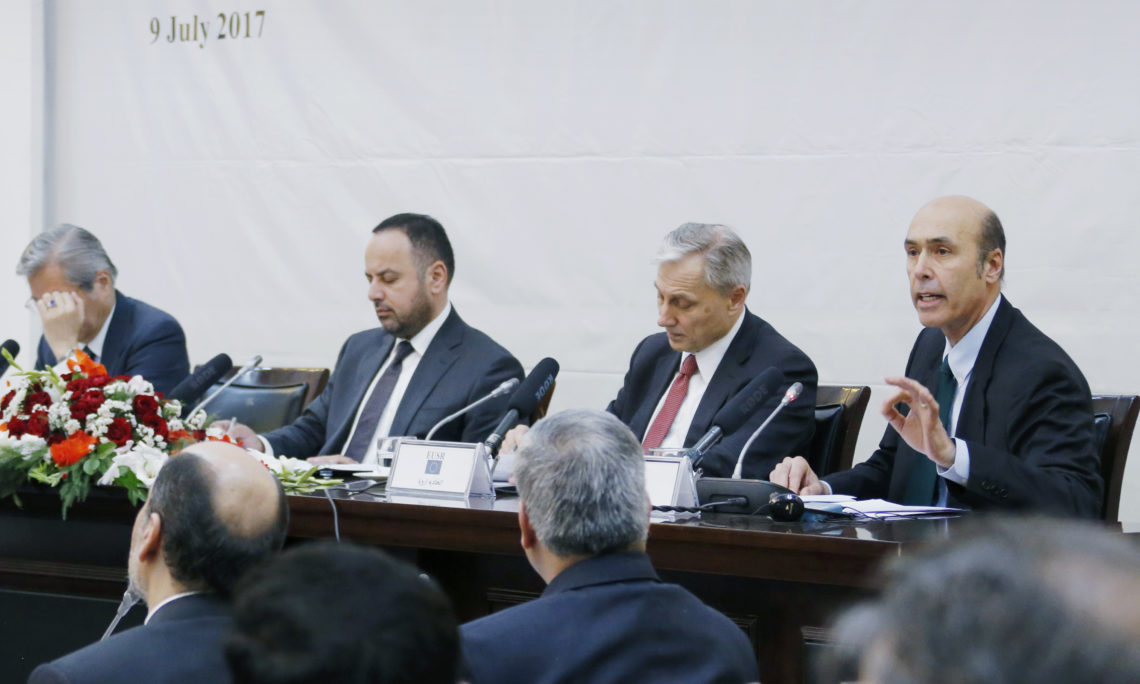 Good morning.  Your Excellencies, President Ghani, Minister Hakimi, Special Representative Yamamoto, Ministers, Ambassadors, distinguished guests, ladies and gentlemen, thank you for permitting me to address this forum on behalf of the United States.

It has been an honor for me to work with the National Unity Government and my international colleagues this past year.  As we deal with the daily challenges that arise in our work, I think it is important to keep in mind the extraordinary progress Afghanistan has made since the year 2001, after decades of conflict and strife left the country battered and its economy in ruins.  We have all witnessed the dramatic improvements Afghanistan.  The nation has achieved much in education, healthcare, communications, infrastructure, and governance, in securing the rights of every Afghan, including women and children.

While we in the donor community are proud of our contributions, the Afghan people deserve the lion’s share of the credit. They have been relentlessly committed to rebuilding this noble nation.

As someone who has served here five years ago, in the latter stages of the previous government, I am struck by the commitment to reform I have seen from the National Unity Government under the leadership of President Ghani and Chief Executive Abdullah.  I saw then, and we should acknowledge now, that flagging reform efforts and mutual distrust constrained partners’ ability to work with the previous government during its final years.

This, along with the massive exogenous shock from the post-BSA reduction in the coalition’s military and civilian presence, led to recession and stagnation, giving rise to increased unemployment, and underemployment, rising poverty, and reduced opportunities for many.

The National Unity Government took these challenges head on and applied sound macroeconomic policies, both monetary and fiscal, to effectively stabilize this serious situation.  The success in raising tax revenue and in strengthening the nation’s public finances are impressive and Minister Hakimi deserves great credit for his tenacious focus on achieving budgetary balance.

Likewise prudent monetary policies kept inflation rates at acceptable levels and achieved exchange rate stability.  Afghanistan’s fruitful conclusion of an Extended Credit Facility with the International Monetary Fund, and its firm compliance with the term of this agreement attests to the credibility of National Unity Government’s policies.    Likewise, Afghanistan’s successful negotiation of its entry into the World Trade Organization in 2016 was another major gain in enhancing the nation’s international credibility, and creates a platform for connecting the Afghan economy to the world.  And of course, that is the surest way of creating conditions for future economic growth and prosperity.  So much, very much has been achieved, but now Afghanistan is at a critical juncture.

Warsaw and Brussels defined and framed the international community’s long-term security and economic engagement in Afghanistan.  The United States is and will remain Afghanistan’s largest foreign assistance partner, on both security and development.  Nevertheless, it must be evident to all of us here in this room that even with this significant and enduring commitment, Afghanistan will not return to the high rates of growth achieved from 2005 to 2012 on a model solely premised on large scale donor assistance.  We need to get out of the box, and create a new policy paradigm based on stimulating economic growth and opportunity through leveraging private investment and removing constraints to private sector growth.

For too long, our common efforts have focused on building the state with donor resources, rather than putting private capital to work.  I am well aware of the hardships Afghans face on a daily basis, but Afghanistan is a wealthy nation, richly endowed in natural resources, with deep cultural ties throughout the region.  Afghanistan has a young and growing population eager to find its place in the global economy and the community of nations, and a worldwide diaspora with capital to invest right here at home.

Trade and commerce has deep roots in Afghan history and culture.  For millennia, Afghans have excelled as traders and exporters of high-quality handicrafts and agricultural products.  As President Ghani has said, the market gene is part of Afghans’ genome.

Afghanistan must do everything possible to allow this entrepreneurial spirit to flourish once again.  We must seize the moment, and in challenging times, to launch and cement transformational changes that finally unlock Afghanistan’s full potential.

Right now, Afghanistan’s private sector is too anemic and too shackled to power the country’s growth and development needs.  Investment was a meager 17.2 percent of GDP in 2016.  That is far too low to sustain the high rates of growth Afghanistan’s economy and its young people so urgently need.

Unless the government takes decisive action now to attract private investment, the economy will grow too slowly to stimulate jobs for the 400,000 young Afghans entering the job market each year (to say nothing of the influx of Afghans returning the country).

We all know that Afghanistan’s private sector faces challenges on many fronts, such as insecurity and inadequate infrastructure.  But business leaders consistently tell me that while security is a challenge, it is not an insurmountable barrier to investment.

Rather, it is an inhospitable business climate, corruption, weak rule of law, political uncertainty, and low levels of regional integration and connectivity that deter the private-sector from ensuring sustainable growth and job creation for its people.

Afghanistan’s business and investment climate has deteriorated, posing major hurdles to growth, creativity, job creation, and, ultimately, self-reliance.  This situation is reflected in the World Bank’s Doing Business report, which puts Afghanistan in the bottom 5 percent worldwide.  That is simply not acceptable.  Weak rule of law and overly excessive regulatory burdens feed the corruption that damages the economy and fuels distrust in public institutions.

Low levels of private investment and extraordinary levels of donor aid have created huge balance of payments imbalances, fostering extensive reliance on imports, even for basic necessities.  Afghanistan’s severe trade imbalance is a direct challenge to self-reliance.  On the positive side, I am convinced that opportunities are abundant for businesses to produce high-value products for domestic consumption and export.

The agriculture and mining sectors, for instance, have great potential for private-sector investment to create jobs, increase exports, and generate government revenues. President Trump firmly believes that Afghanistan is a wealthy nation. The task at hand is to rearrange the matrix and tap the abundant natural and human resources of this nation, and its link to the region and the world.

I believe between now and the Senior Officials Meeting in October, the government should boldly focus on achieving a series of quick wins that demonstrate its commitment to private sector led growth. Success breeds success, and each win will build on the last to create an unstoppable momentum for the future.

We need to take risks, but Afghans are risk takers, and calculated risk can spur a profitable return.

Let me give you some examples of potential reforms that could inspire investor confidence and kick start private-sector growth:

We are convinced Afghanistan can become a regional hub for telecommunications, trade, energy, and electricity. But for this to become a reality, the government must build an architecture that favors private capital and creates incentives for entrepreneurs willing to take risks.

In addition to economic reforms to foster private-sector development, all segments of Afghanistan’s political class and civil society must come together in solidarity and with a commitment to act together.  It starts with more cohesion within the National Unity Government, and I know President Ghani and Chief Executive Abdullah are doing this.  It requires a firm and decisive commitment to appoint competent, reform-minded senior officials, and that demonstrates that the Afghan government can act.  Unity of effort is essential as we work to bring peace to Afghanistan and improve the lives of the Afghan people. That means unity among Afghans, unity with and among its international partners, and a unity of vision and effort between governance, security, and economic priorities.

Certainly rule of law is integral to building confidence in the government. Combatting the culture of impunity means a willingness to prosecute corrupt officials, including the most senior officials when they commit serious crimes and violate Afghanistan’s laws.  Only vigorous prosecutions of those who engage in corrupt and criminal behavior can show the Afghan and the world that no one is above the law and that Afghanistan is committed to entering an era of true accountability.  Attorney General Hamidi and the Anti-Corruption Justice Center (ACJC) have provided great leadership.

We must protect courageous prosecutors and judges as they carry out this important work.

Elections are another vital signal to Afghans and to Afghanistan’s partners. The United States strongly supports the recent announcement of parliamentary elections for July 2018.  This year’s electoral reforms must lay the basis for credible, inclusive, and transparent elections next summer. The Afghan people deserve fair elections and transparent opportunity to elect their leaders.  In a democratic Afghanistan the people should have last word.

It is essential that Afghanistan maintain forward momentum on human rights, which is what so distinguishes present reality from the dark night of the Taliban.

Advocating for the rights of women and girls and supporting their full participation in the workforce and access to education will build the essential foundation of a strong and just society, and tap all of the nation’s genius and talent.  Human rights – too often a casualty of war – must continue to be protected, including combating violence against journalists who exercise our right to a free media.  The barbaric acts of terrorism committed by our enemies, including the unconscionable attacks during Ramadan, should make us ever more aware of why we fight together and should strengthen our dedication to the task of creating a freer and more just Afghanistan.

We should ensure that the huge advances in education, healthcare, women’s rights, media freedom, and other areas are not rolled back. This is a critical element of the compact that Afghan leaders have with its people. Any backsliding emboldens the terrorists and insurgents.

The private sector must be brought in to take a leading role in delivering key services, such as healthcare and education.

Let me conclude by saying, the United States is committed to this cause here in Afghanistan. We have not forgotten why we came here and we know that what happens here is vital to our very national security.

At the same time, American citizens demand transparency and accountability in our efforts, and we need our taxpayers to be able to see the impact of our assistance to Afghanistan.  So we will maintain our developmental partnership, and encourage the high-impact policy changes needed for Afghanistan to become self-reliant through more incentive-based assistance focusing on transformational economic and governmental milestones. The Afghanistan-U.S. Compact that we are rolling out will be based on reform and closely complement and support the broader Warsaw and Brussels objectives.

We have high expectations for the National Unity Government, and now is the time to deliver on the reform that is urgently needed.

In conclusion, we are confident that the government can deliver by the Senior Officials Meeting in October. The National Unity Government has established a strong record of reform upon which it will continue to build, and will get a second wind. The Afghanistan National Defense and Security Forces have fought bravely against Afghanistan’s most relentless and vicious enemies.

It is a common fight that we have to wage and we have to see it through until peace can be achieved. Fortunately, the Afghan people are proud, resilient, industrious, and forward-leaning. It is an honor to participate in this significant event that we believe will impact on the future well-being of this great nation.