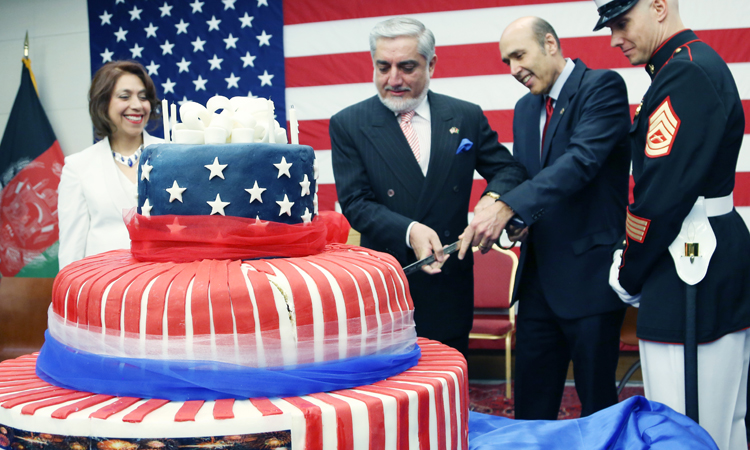 Salaam Aleykum!  Welcome to the U.S. Embassy, and thank you for joining me, my wife, Lisett, and all our Mission staff for this celebration of our Independence Day.  Again, let me thank Chief Executive Abdullah for honoring us with his presence today.  He is a formidable leader, an Afghan patriot, and someone I have the highest regard and respect for.  I consider the Chief Executive a friend of mine, and more importantly a longstanding friend of the United States.  Let me also take a moment to recognize and give a special thanks to our Deputy Chief of Mission Dennis Hearne and Assistant Chief of Mission Steve Bondy who are up here on the podium with me.  They have been my able and very, very loyal front office partners this past year and are both outstanding, outstanding diplomats who have provided strong leadership in challenging times.  They will both be leaving us later this summer and I wanted to recognize them for a job well done.

The Fourth of July is a day when all Americans come together to reflect on the founding of our great nation, and about the values the United States embodies, and it’s an honor to be able to share this occasion with all of you.

Let me give you some thoughts about the meaning of this holiday – especially because today we are celebrating it here in Afghanistan.

241 years ago, our country’s Founding Fathers conceived the United States of America on the principles of justice, liberty, rule of law, and freedom.  Though we have faced many dark trials trial and adversity, we have been guided by the wisdom of the Founding Fathers and the Constitution they created, which embodies those core values we hold very dear.  It was a remarkably radical idea in its time, a leap of faith, the founding of a nation based on the sacred principle that governments are accountable to their citizens.  This revolutionary idea is that the people are sovereign and that the people have the last word.

Americans have sacrificed a great deal to gain and maintain their independence, and stay united.  They are justly proud of it, and celebrate it each year.  Like Americans, Afghans also zealously value their independence and have sacrificed enormously to protect it over many, many centuries.  And so, we are here, honored to be with our Afghan brothers and sisters, to celebrate our Independence Day in Kabul.

I often remind audiences that no country in the world has been more victimized and more viciously assaulted by terrorism than Afghanistan.  Indeed, Afghans have had to endure 40 years of violence starting with the criminal Soviet invasion of a peaceful nation, and the Red Army’s murder of nearly 2 million Afghans.  The nation also suffered under the internecine struggle between the Mujahedeen factions, and then came the dark night of the Taliban.

Despite the trials and the suffering, Afghans have made remarkable progress in the last 16 years.  And I am confident that Afghanistan will not return to the dark days of the past.  The United States has a solemn commitment to the Afghan people and we are not going anywhere and we will stand shoulder-to-shoulder with you.  We do so not only because of our solidarity with a strong and resilient people, but because it is in our interest to do so.

So while we will not waiver in our commitment, and be equally unwavering in our support for the National Unity Government and invest in this nation, the Administration of President Trump will insist that Afghans remain united and redouble their work on behalf of a better future.  It is critically important that the National Unity Government – in solidarity with all political leaders of good faith – recommit to reform both civilian and security institutions.  Let’s face it:  the Afghan people have little tolerance for corruption and graft.  They want competent and honest people to be in positions to contribute to building stronger, healthier government institutions that are accountable to the people.

As my Afghan friends are first to point out, corruption is a cancer that is killing the nation.  I know that President Ghani and Chief Executive Abdullah are committed to fighting corruption, but they need the help of all Afghans who truly love their country.  This culture of impunity must end, and all those who illegally profit by robbing the people should be prosecuted.  The future of Afghanistan is in its youth – young visionaries who believe in building a better nation of which all can be proud; young entrepreneurs who are creating jobs and new business opportunities.  And the nation’s political and business leaders in turn must do more to give opportunities to this vibrant and dynamic new generation.  And it is also the obligation of the nation’s political leaders, in and outside of government, to ensure the holding of credible Parliamentary elections next year and Presidential elections in 2019.  These elections are vital to restoring confidence and public support in democratic institutions and the leaders who represent the people.

As you may have observed around this room our theme for this year’s July 4 event honors New Orleans.  In 2005, when Hurricane Katrina descended on New Orleans and burst through that city’s floodgates, we encountered yet another historic challenge.  The city that we call the Big Easy – a city of Old World charm, great jazz music, and a huge heart – was decimated by floodwaters covering 80 percent of the city.  That storm took 1,000 lives, destroyed tens of thousands of homes, caused $135 billion in property damage, and forced more than half of the city’s nearly 500,000 residents to move away from the place they loved.  My son lives in New Orleans, so the city and its path back from the brink of destruction means a lot to me.  And each time I visit Louisiana, I am amazed and inspired by the city’s rebirth and by the local community’s resilience.  The people of New Orleans, and Americans from coast to coast, will always persevere, and we honor that determination today.

You know, I see that same spirit and determination in Afghanistan, and it humbles me.  So the fight in Afghanistan is very much a struggle between those forces that empower and liberate people pitted against those who physically and spiritually subjugate their fellow human beings.  The struggle in this heroic land is a fight between the vast majority of Afghans who simply want to rebuild their country and create a better life for their sons and daughters, against a small group of people who are filled with hate and know only the path of violence and destruction.  The fight here is as old as human nature and human history.  I have no doubt that the forces of light, faith and love will prevail, and bring peace and honor to those thousands of brave young Afghans, Americans, and of the other allied nations who have fallen in this cause.

As we face the current struggles together, let’s not forget the dark times in our fight for independence when the light of victory seemed so dim and elusive, but let us also rejoice in what this July 4 signifies to millions of Americans, as a day of faith and renewal, of hope and freedom.  In closing, let us pray that the symbolic light of our martyrs will pave the way for peace and prosperity to this noble land of Afghanistan.

Thank you very much for coming here this evening and celebrating America’s birthday with us today – and more than anything, thank you for your friendship.  Happy Fourth of July!