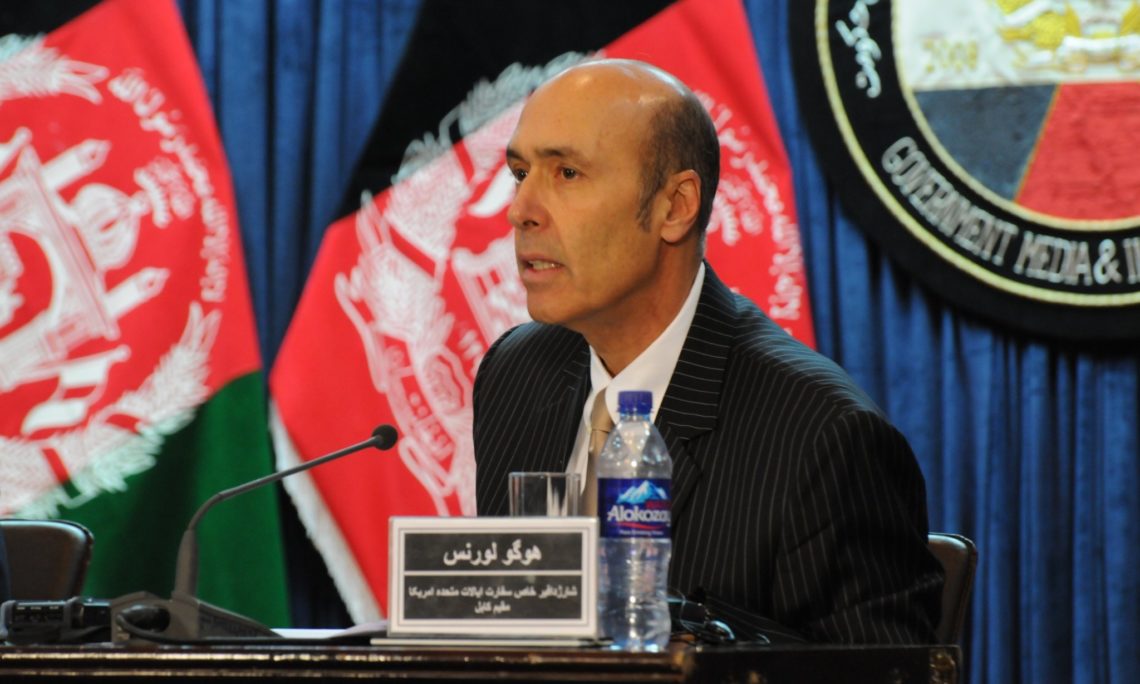 Thank you Director Sediqi.  This week has been historic in more ways than one, and I think it is appropriate that General Nicholson and I come before you together to discuss this historic moment.

The United States is an enduring partner to Afghanistan, and President Trump’s words on Tuesday reinforced that commitment before the American people and the world.  Today, we are here to show our support for the National Unity Government and the Afghan people.

On August 21, President Trump announced a new, integrated regional strategy for the U.S. approach to South Asia.  The new U.S. strategy focuses primarily on challenges in Afghanistan and Pakistan, while recognizing that an effective plan to enhance security and stability in South Asia requires a regional approach.

The strategy makes the U.S. commitment to Afghanistan clear:  the United States of America has pledged to continue the fight against Afghanistan’s enemies, against terror, and the agents of chaos.  The strategy recognizes the importance of fighting the Taliban and ISIS and any terror group who would threaten the Afghan people.  And the United States, our NATO Allies, and the Afghan Security Forces stand shoulder-to-shoulder in this struggle.

Under the new strategy, we will integrate all instruments of U.S. power – diplomatic, economic, military, and intelligence – toward achieving the ultimate goal of a political settlement that protects U.S. and Afghanistan’s vital interests.  Achieving such a settlement requires that the Taliban participate in a meaningful dialogue.  The Taliban has a choice:  they can continue to kill fellow Afghans and terrorize communities in a conflict they have no possibility of winning, or they can seek reconciliation and put an end to the war.

We also stand fully behind the Afghan government in its efforts to root out corruption and malfeasance in the Ministries of Defense and Interior, and across the government.  The progress they make on increasing transparency in institutions will help us commit more resources to reforms – and to the fight.  Afghanistan has come a long way from the ashes of 2001, but more needs to be done.  The National Unity Government understands that and much has been accomplished.  Nevertheless, President Ghani and Chief Executive Abdullah understand the need to do far more, and have committed to continued reforms through a bilateral compact, and our U.S. strategy will sync with Afghanistan’s reform efforts.  Some of those milestones and benchmarks that demonstrate Afghanistan’s commitment will be:  holding elections in 2018 and 2019, pursuing greater inclusivity in government, making progress against corruption in the security sector and public institutions, and completing the reforms that are necessary to spur more private sector-led economic growth.

The new strategy also requires building diplomatic consensus for a stable, peaceful Afghanistan among regional actors and outside powers, and ensuring they play a constructive role toward this goal.

We must maintain pressure on the Taliban to join a peace process with the Afghan government to end the war in Afghanistan.  We will remove the incentives for the hedging behavior by some that leads to support for the Taliban, and we will emphasize with all regional countries the importance of cooperation to reduce the threat of terrorism and nuclearized conflict.  Pakistan and India will play a large part of this plan, and in the coming days and weeks we will seek help from Afghanistan’s neighbors to assist in the fight.

While Pakistan is an important partner for achieving our priorities in the region, it must take decisive action against militant groups based in Pakistan that are a threat to Afghanistan.  Pakistan has much to gain from partnering with us in the region, including on areas where we have mutual interest, such as the facilitation of a peace process that will lead to a stable, peaceful Afghanistan.

Secretary of State Tillerson has noted that:  “Pakistan has suffered greatly from terrorism and can be an important partner in our shared goals of peace and stability in the region.  We look to Pakistan to take decisive action against militant groups based in Pakistan that are a threat to the region.”  He also said that “India will be an important partner in the effort to ensure peace and stability in the region, and we welcome its role in supporting Afghanistan’s political and economic modernization.”

Real challenges lay ahead, but I am confident we can surmount them together, and will make Afghanistan a safe place for Afghans to prosper and raise families.  As President Trump said, “we are a partner and a friend.  Afghans will secure and build their own nation, and define their own future.  We want them to succeed.”  And as I have said previously on many occasions, we and our allies are firmly with Afghanistan, and we are not going anywhere, and we’ll no longer base our approach on artificial and rigid timelines, but objective conditions until the job is done.