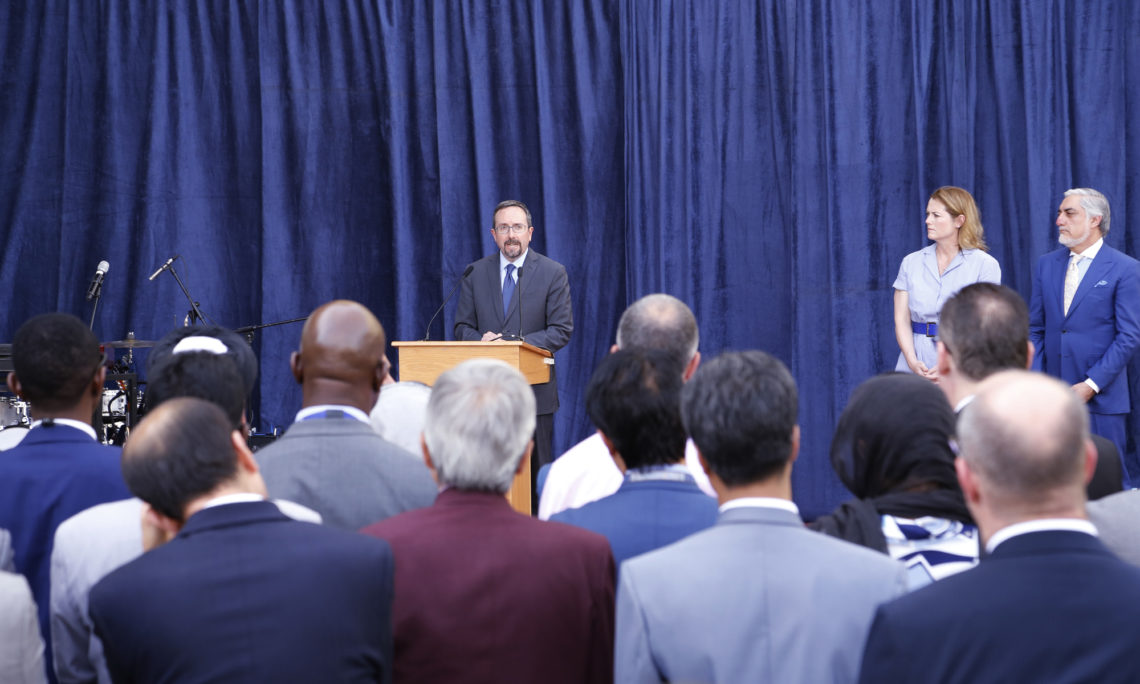 (as prepared for delivery)

Thank you for joining us today to celebrate the 243rd anniversary of our birth as an independent country. Big thanks to our sponsors for their support for today’s event. And our thanks to the fantastic musicians of “Barbud”.

Let me offer our condolences to all those across this country who have suffered and lost loved ones since we last came together.

At this event last year, I talked about the struggles our first leaders confronted in turning their idea of an independent, sovereign United States into a reality. They agreed on what they did not want – continued domination by a colonial power. But it was much more difficult for them to agree how our new country would be governed. Part of the reason it was so difficult to resolve some of their differences: the women of revolutionary America did not participate in the key discussions about how the new country would be organized and governed.

One of the issues that was not resolved was the deep divide over slavery. That divide led us, 85 years later, to a terrible civil war. It was a conflict that saw regular battles with tens of thousands of casualties – including 22,000 casualties in a single day’s battle. At the time, our population was the same size as Afghanistan’s today.

Our greatest president, Abraham Lincoln, who led the United States through those dark days, said “America will never be destroyed from the outside. If we falter and lose our freedoms, it will be because we destroyed ourselves.” Those wise words of caution have guided the U.S. for over 150 years since the end of our Civil War. I would suggest that Afghans across this country, at this moment in time, should be guided by the same concern. Because as brutal as this war has been, making peace – a lasting peace – will be even harder.

Afghans have shown many times throughout history how committed you are to govern yourselves, free from foreign interference. Afghans bravely confronted and defeated the Soviet Union’s aggression. But I think most of you would agree that many of Afghanistan’s problems today come from within – from the inability of many Afghans to see your diversity as a strength; to find common ground and purpose supporting the national interest along with one’s community and family; and to be prepared to compromise and work together to benefit all Afghans.

Why is this so important? Because if the leaders here tonight and around this country are going to seize the opportunity before you to finally bring this terrible conflict to a close – it will require you to compromise. One of our founders (and first diplomats), Benjamin Franklin, said “Compromisers do not make great heroes, but they do make great democracies.” Afghanistan has sent countless heroes to the field in the past 40 years. But it has not created enough compromisers to safeguard your republic for the next 40 years.

But Americans can – and will – remain your friends and partners. We will support Afghan men and women who come together to address these tough problems, and to make the hard choices to achieve peace. Because those who have lost their lives, through decades of conflict and in recent tragic events, deserve this effort to find common ground.

Thank you again for joining us tonight. We look forward to continuing to work with everyone in this society dedicated to helping create an Afghanistan in which all its citizens have the opportunity to live in peace and dignity.