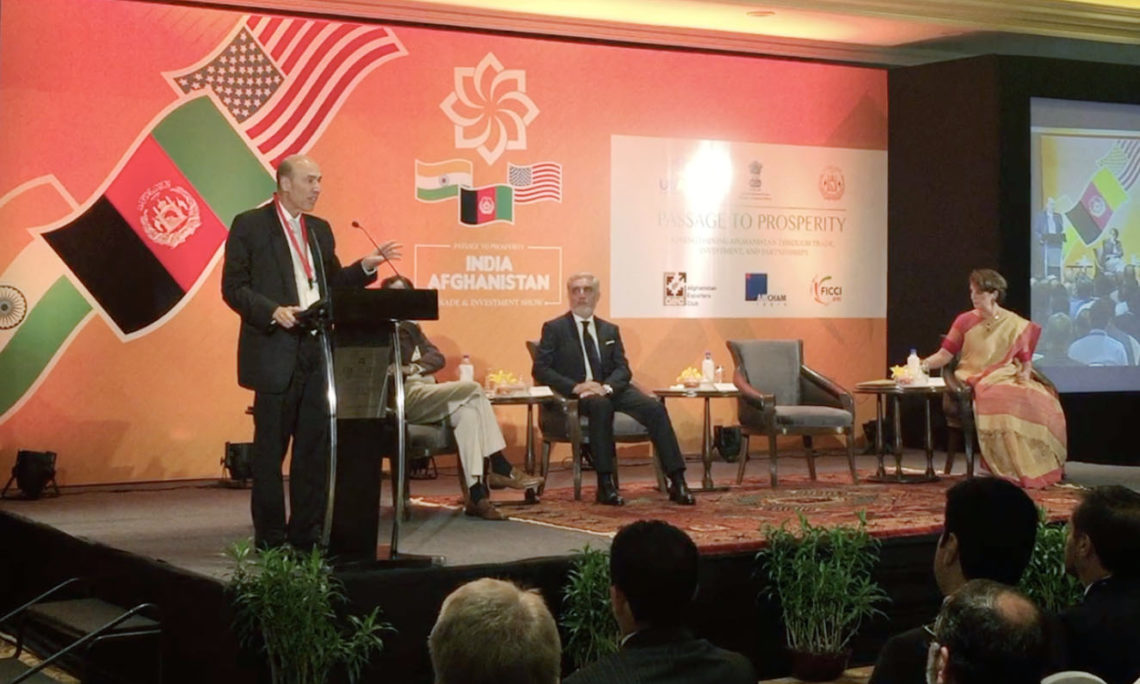 Thank you for the opportunity to speak with you this morning. I am delighted to be part of such a distinguished panel.

I have had the privilege over the past year of representing the United States in Afghanistan and working with the international community on ways we can support the government of Afghanistan in building a stronger, more peaceful and prosperous country.

Afghanistan, India, and 12 of their neighbors gathered in Istanbul almost six years ago to address the shared challenges and interests of Afghanistan, its neighbors, and regional partners. These fourteen countries, with support from the international community came together for a frank, results-oriented discussion, which concluded that a stable and secure Afghanistan is vital to the region’s prosperity.

This meeting launched what came to be called the Heart of Asia-Istanbul Process. And truly, Afghanistan is at the heart of the region, a place where history saw traders venture through snowy mountains to Afghanistan’s thriving towns; where cultures met and merged; and where a multitude of ethnicities, tribes, and religions crossed paths.

Indeed, Afghanistan’s ability to flourish and thrive affects the health and well-being of the entire region.

Some 10 months ago, the governments of India and Afghanistan affirmed their commitment to the well-being and welfare of the Afghan people at the 6th Heart of Asia Ministerial. And again in June, leaders in the United States, Afghanistan, and India reaffirmed their commitment to Afghanistan’s prosperity with a call to deepen and expand economic engagement and investment. And in August, the United States laid out its South Asia strategy to help Afghanistan become more secure, and it acknowledged Afghanistan would need its friends and neighbors to encourage not only a military victory, but an economic renaissance. Clearly India has a key role to play in the region.

Today, the United States is proud to stand with our Indian and Afghan partners at this Trade and Investment Show, aptly named “The Passage to Prosperity.” It is the first tangible deliverable in response to the call for increased collaboration, and it paves the way for future integration and partnership.

This Trade and Investment Show delivers on our shared commitment and sets our trilateral partnership on a renewed roadmap focused on trade and investment – essential to building and maintaining the region’s stability.

As President Trump said, a “fundamental pillar of our new strategy is the integration of all instruments of American power – diplomatic, economic, and military – toward a successful outcome.” We know regional economic cooperation and private sector involvement are entwined with our overall goal of a stable Afghanistan that stands with us in the fight against terror.

And we know the Afghan government is on the right path in meeting its commitments to the Afghan people to improve governance and social well-being.

We welcome the Afghan government’s commitment to economic reform that will unleash the potential of the private sector, its progress on elections; its fight against corruption, and its inclusion of a broad base of Afghans – especially young adults and women of all ages, into society, politics, and the economy. These commitments are indicators of a nation and an economy on the cusp of unprecedented private-sector-led growth.

The growth of trade with Afghanistan and India, and the promise of shared prosperity in the region’s economies deserve our support, and we know you share our understanding that the security, political stability, and economic prosperity of Afghanistan and the region are inextricably intertwined.

We commend your participation in this event, and we look forward to expanding the economic integration among our countries.