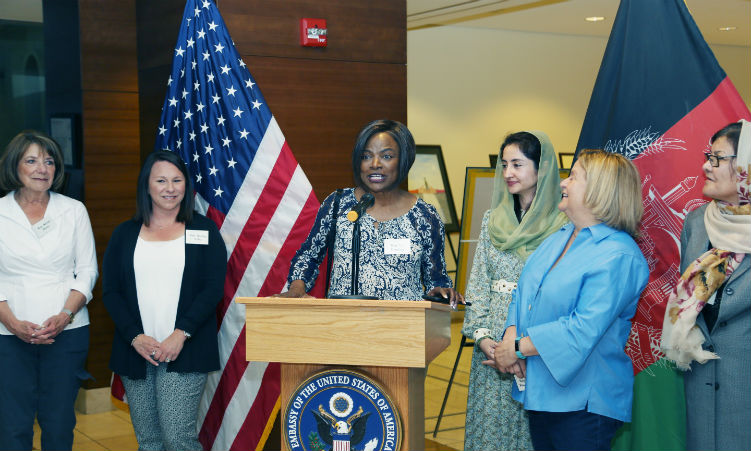 Kabul – A bi-partisan women’s Congressional delegation (CODEL) led by U.S. Representative Martha Roby (R-AL) visited Afghanistan May 9 and 10. The CODEL conducted oversight of American operations in Afghanistan with a focus on the contribution, efforts, and concerns of U.S. women in the U.S. Armed Forces with an additional focus on gender issues and challenges facing Afghan women.

Special Chargé d’Affaires Ambassador Hugo Llorens briefed the CODEL on current priorities for the U.S. Mission in Afghanistan. “The visit of this important U.S. Congressional delegation is a sign of the significance the United States places on achieving gender equality and women’s empowerment in Afghanistan,” said Ambassador Llorens.

The CODEL participated in two panel discussions with Afghan women leaders from civil society organizations and beneficiaries of U.S. foreign assistance programs that directly target women’s equity. Afterward, the Congresswomen met with Afghanistan’s First Lady, Rula Ghani, at her offices. Representative Roby said, “The United States is committed to building on the progress made by Afghan women. The success of women in this society is essential for Afghanistan’s continued development, and our delegation appreciated the opportunity to hear directly from Afghan women about their challenges and opportunities.”

At the NATO Resolute Support camp in Kabul, the CODEL also met with female U.S. Armed Forces members. The delegation discussed issues of women’s integration, equality, professional development, leadership, and sexual assault. Representative Susan Davis (D-CA) said, “We thank all the brave women and men in uniform here in Afghanistan who are putting their lives at risk to keep us safe. It was an honor to meet with them.” The CODEL also took the time to meet with Embassy staff constituents, including many of the diplomatic spouses employed by Mission Afghanistan.