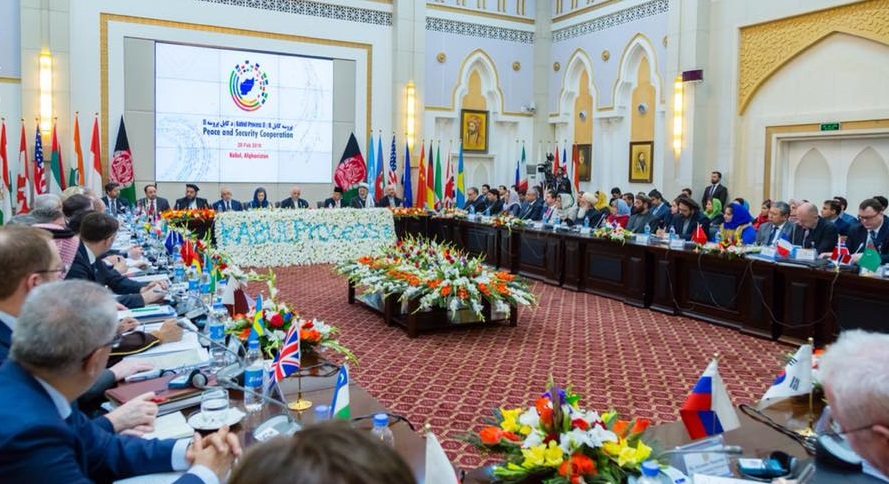 We, the high-level representatives from the region, members of the international community, and international organizations—participating in the second Meeting of the Kabul Process for Peace and Security Cooperation—express our support to the Government of the Islamic Republic of Afghanistan for organizing this Meeting. We thank H.E. President Mohammad Ashraf Ghani and H.E. Chief Executive Dr. Abdullah Abdullah for presenting their vision for peace and security cooperation.

We condemn in the strongest terms the horrendous and unacceptable levels of terrorist violence inflicted upon the Afghan people—taking their innocent lives and deepening their pain each day—and reiterate our strong and unequivocal commitment and support to ending this suffering through an inclusive political process, as well as military actions, in their respective territories, against terrorists, terrorist sanctuaries, and terrorist support infrastructure wherever they are and without any distinction.

We reaffirm that the Kabul Process must lead to the renunciation of violence and breaking of all ties to international terrorism, as well as respect for the equal rights of all Afghans, including women, under the Afghan Constitution. Hence, we appreciate the Kabul Process as a main forum and vehicle under the leadership of the Afghan Government to lead peace efforts to end violence in Afghanistan. As Afghanistan’s immediate neighbors, regional countries, members of the broader international community and international organizations—participating in this Meeting—we support the early and full realization of this Process’ vital objectives.

We reiterate our continued support to the Afghan-led and Afghan-owned peace and reconciliation process and collectively agree that direct talks between the Afghan Government and the Taliban—without any preconditions and without the threats of violence—constitute the most viable way to end the ongoing agony of the Afghan people. After many years of continued war and violence in Afghanistan, which have killed and maimed countless of Afghan citizens, Afghans deserve to live in sustainable peace and prosperity. Therefore, we also reiterate the call we made on 6 June 2017 in the first Meeting of the Kabul Process on all armed groups to start peace talks with the Afghan Government and cease violence immediately. We strongly support the Afghan Government’s commitment to forging a practical plan for reconciliation, which includes negotiation of various issues and any contested aspect of the international community’s future role in Afghanistan.

In this Meeting, the Afghan Government has reiterated its will and determination for peace through dialogue. The countries in the region and the international participants call on the Taliban to pursue their goals through direct talks with the Afghan Government with the aim of an ultimate political settlement that leads to their dignified return to a peaceful life. A peace agreement will be a victory for all its parties and a defeat for none. We, the representatives of the international community, recognize that for the success of their dialogue, both the Afghan Government and the Taliban will need firm international support and assistance. Consequently, we assure both parties of our strong will and commitment to stand behind an intra-Afghan dialogue for sustainable peace and security in Afghanistan. We are equally united and determined to pursue those who continue down the path of violence, taking the lives of innocent people, and commit to disrupt their supporters and financiers.

As noted in the Afghanistan’s National Action Plan on Women, Peace, and Security, women’s full and meaningful participation in reconciliation should be a cornerstone of any lasting peace. We welcome the Afghan Government’s continued commitment in this regard—as evidenced by the increased number of female members in the reformed High Peace Council—and pledge our continued support for the implementation of the National Action Plan.

We also acknowledge the significance of trust-building and strong bilateral relations between Afghanistan and its neighbors as an important element for ending violence and reaching durable peace in Afghanistan and ultimately improving the stability and prosperity of the whole region.

We acknowledge that while terrorism is a serious and growing common threat to all of us, there is urgent need for common understanding and cooperation through necessary mechanisms, including those of the SCO and others, in the region against this menace particularly by us—the participants of this Meeting—in support of Afghanistan as the front-line state against over twenty domestic, regional, and transnational terrorist groups.

While fully appreciating the scope and gravity of threats posed to Afghanistan, its neigbours, the region, and the entire international community by these domestic, regional and transnational terrorist groups, we commit to undertake coordinated measures against these terrorist groups regardless of their location and with no distinction.

We fully support resolution A/RES/60/288 (2006) that adopted the UN Global Counter-Terrorism Strategy and Plan of Action for its implementation, through which member-states condemn terrorism as being unacceptable, criminal and unjustifiable in all its forms and manifestations, and without any distinction of any sort. Further, as stated in the Strategy, as a measure to prevent and combat terrorism, we emphasize that states must “refrain from organizing, instigating, facilitating, participating in financing, encouraging or tolerating terrorist activities and to take appropriate practical measures to ensure that our respective territories are not used for terrorist installations, or training camps, or for the preparation or organization of terrorist acts intended to be committed by other states or their citizens.”

We resolve to take practical steps towards an accelerated regional security and counter-terrorism cooperation with Afghanistan, which is essential for ending terrorist violece, advancing regional stability, connectivity, and economic cooperation. We also resolve to jointly address the threats posed by Transnational Terrorist Networks (TTNs), as well as Transnational Criminal Organizations (TCOs), which continue to terrorize our people, destabilize our states, and spread fear and terror. These groups move freely across our borders, join with local insurgents, enjoy safe havens, and seek to target our citizens and our governments.

In addition to bilateral counter-terrorism cooperation, there is an increasing need for a strong, consistent, collective and multilateral campaign against terrorism and the spread of its ideology, backed by a set of practical measures by each regional and international stakeholder. In this regard, we underscore the primary role of the states and their competent agencies—as well as the significance of state-to-state relations and cooperation amongst these agencies—in preventing and countering terrorism at the national, regional, and global levels. Therefore, we commit to actively engaging with the region and the international community through this and other multilateral counter-terrorism mechanisms to rid this region of this menace.

In conclusion, we once again reiterate our support to the Kabul Process for an Afghan-led, Afghan-owned peace and reconciliation process, as well as reaffirming our commitment to the necessary fight against terrorism to bring lasting peace, security, stability, and prosperity to Afghanistan. The next meeting of Kabul Process will assess the progress achieved on the above-mentioned areas. This Declaration is adopted on 28 February 2018 in Kabul, Afghanistan by Australia, Azerbaijan, Canada, China, France, Germany, India, Iran, Italy, Japan, Kazakhstan, Kyrgyz Republic, Korea, Norway, Pakistan, Qatar, Russia, Saudi Arabia, Sweden (Nordic Plus), Tajikistan, Turkey, Turkmenistan, United Kingdom, Uzbekistan, United Arab Emirates, United States, EU, NATO and UN.