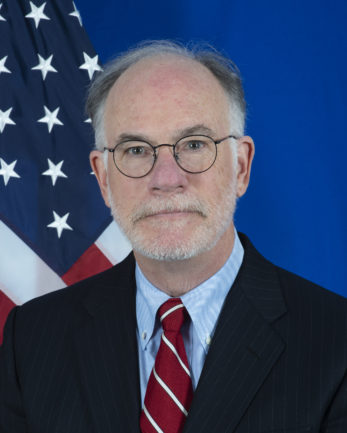 Ambassador Ross Wilson arrived in Kabul January 18, 2020, as the U.S. Chargé d’Affaires to the Islamic Republic of Afghanistan.  Over the course of four decades as a U.S. diplomat, he has served as ambassador to Azerbaijan from 2000-2003 and to Turkey from 2005-2008, and he held later assignments as chargé d’affaires in Turkey in 2014 and the Republic of Georgia from 2018‑2019.

Elsewhere overseas, Ambassador Wilson served at the U.S. embassies in Moscow and Prague and was consul general in Melbourne, Australia.  He was principal deputy to the ambassador-at-large and special advisor to the U.S. Secretary of State for the new independent states of the former Soviet Union in 1997-2000.  He also served as deputy executive secretary of the U.S. State Department for Secretaries Jim Baker, Lawrence Eagleburger, and Warren Christopher; chief of staff to Deputy Secretary of State Robert Zoellick; chief U.S. negotiator for the Free Trade Area of the Americas; and worked in State Department offices dealing with the USSR and Egypt.

From 2010 to 2014, Ambassador Wilson was director of the Atlantic Council’s Eurasia Center, where he led Council work on Turkey, the former Soviet states, and regional energy, economic, and political issues and integration, and organized its annual Energy and Economic Summits in Istanbul. In addition, he has been a visiting lecturer in international affairs at The George Washington University in Washington, D.C., and served on the boards of Global Minnesota and the Institute of Turkish Studies and on advisory councils of other non-profit organizations active in international affairs.

Ambassador Wilson received a bachelor’s degree from the University of Minnesota and master’s degrees from Columbia University and the U.S. National War College.  He is a recipient of the U.S. President’s Meritorious Service Award, as well as numerous U.S. Department of State awards and honors.  He holds memberships in the Academy of American Diplomacy; the American Foreign Service Association, Diplomatic and Consular Officers Retired; the Washington Institute of Foreign Affairs; and the Choctaw Nation of Oklahoma.  He is married to Margo Squire, also a veteran of the U.S. Foreign Service.