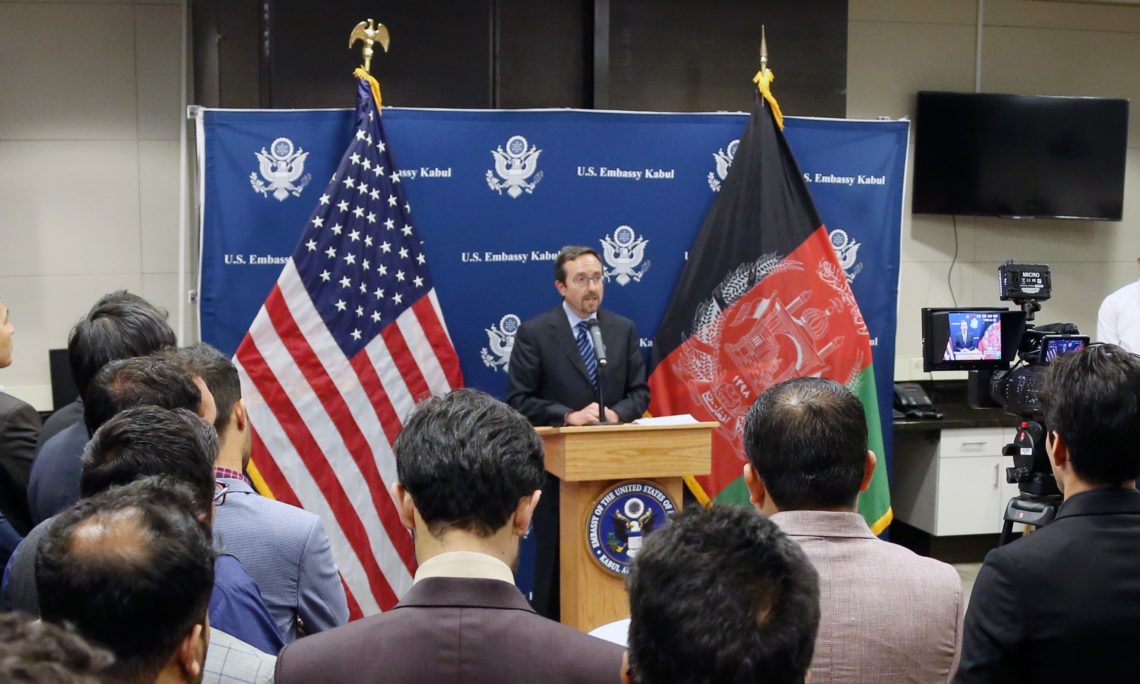 Colleagues, friends, thank you for joining us tonight.  Khosh amadeen wa tasleeat (welcome and my condolences).

Every World Press Freedom Day is important.  This one is unfortunately very sad and tragic for all of us, and I want to thank you for joining us so we could share in your sorrow and so that you could hear from us how committed we are to supporting you and the work you do and how important we think the work you do is.

And before I make a few other remarks about this day and why I believe it is so important, and we believe it is so important, I want to first take a minute and name those who are no longer with us, but should be: Mahram Durani, Ebadullah Hananzai, Sabawoon Kakar,  Yar Mohammad Tokhi, Ghazi Rasooli,  Nowroz Ali Rajabi, Shah Marai, Saleem Talash, Ali Saleemi, Abdul Manan Arghand, Ahmad Shah.

If you would please, all join me and your friends and colleagues from the American Embassy and from the U.S. government in a moment of silence to honor them and their loss and their lives.

Tashakor (thank you).  As all of you know as working journalists or supporters of working journalists, when we experience violence like this and when you are reporting on violence like we experienced in Kabul and Kandahar and Khost this week, often those we have lost are characterized as victims of the violence, or they become a statistic.  But, thanks to your great reporting, we know those who were lost this week for who they were as journalists; as professionals; as men and women of their communities and their families who leave big holes in the hearts of so many.

For me there is another word that applies, and that is that they were heroes. They were doing heroic work because they risked their lives, as all of you do, to provide news, to provide information, perspective, and context on what is happening in Afghanistan — and why it is happening.  And not just to fellow Afghans but to people around the world who are interested in what is happening here, who strive to understand the complexity of this conflict. People who are involved in making policy decisions for governments like mine who are trying to understand what is going on beneath the surface of events.  You provide that information and context to people who want to empathize with Afghans because they have lived here, they have experienced your culture, they have friends, they are now far away and they still remain connected and they want to know what is going on.

I want to take another minute today to remember another heroic journalist who I know is known to some of you, probably most of you, in this room, and who I think would probably bridle at being called heroic, and that is Marie Colvin.  Marie Colvin was a very dedicated, renowned, celebrated war correspondent who I met in 2010 when she came to the Republic of Georgia where I was serving as Ambassador to help us promote free and independent media there.  And she did a roundtable session with a group of colleagues, much like yourselves, who were working to build a culture of understanding and tolerance — in a transitional society — for what it means to have a free and independent media, where journalists are protected; where they are allowed to speak truth to power; where they are celebrated for doing so.

At that time, Marie had already paid some prices for the work she did.  She had lost an eye covering conflicts in Sri Lanka.  And in the course of that conversation with journalists in Georgia, she described having arrived in Tbilisi from spending several weeks in Afghanistan, covering the conflict at that time. And she described talking to some of her colleagues about the experience of being out with U.S. and Afghan security forces and that sense of dread and fear of violence that accompanied her as she went about doing her job. And she said to those journalists that day, “It’s never been more dangerous to be a journalist in a combat zone.  Now we are facing not just rockets or bullets, we journalists have also become targets.” She then went on to pose the rhetorical question to those journalists, given what she had just described, given that trend line, she said, “You know, is what I do worth it?” And she answered her own question by saying, “Yes, I believe it is,” and then went on to explain why she believed that, because providing objective information and perspective for people in the midst of conflict was so important to wider audiences.

Two years later Marie was killed in Homs, covering the terrible conflict in Syria.  But she lived a life of purpose, and made a difference in the lives of many people through her reporting and through her dedication to getting the story even in the midst of violence.  And I know that is something that all of you do every day.  You may not be as celebrated as Marie Colvin, or as known to wider audiences, but you are known to us, and you are known to your fellow Afghans who value what you do.  And if anyone wanted or needed objective information about how Afghans value what you do, they would only need to look at the fact that in 15 years, this country has gone from one independent radio station to hundreds of radio and television outlets. And I see every night, when I channel surf, the range of engagement and talk shows that are happening and the efforts to cover lots of different areas of the country.

All of that is so important, not just to your fellow Afghans but to the wider world. Because if you can practice, and promote, and celebrate, and reinforce free and independent media in Afghanistan with the conditions you all experience on a daily basis, then it can happen anywhere in the world —  and it should happen everywhere in the world.  And together with the constitutional protections that you have in place, your vibrant free press is what separates Afghanistan from so many other countries in conflict –  and frankly many other countries who are not in conflict.

So on this very sad and somber week when I know all of you are suffering for your losses, I want you to know that you inspire all of us, and we will continue to do everything that we can to support you in practicing your craft and your profession, but also in supporting free media around the world. And I look forward to the day when we can recognize and celebrate your fallen colleagues and the contributions they have made to an Afghanistan that is, when we celebrate it, a country in which everyone has the opportunity to live in peace and dignity and freedom.

So thank you all for joining us this evening.  Thank you for all the great work you do. And thank you for the strong partnerships that we enjoy. And I look forward, as do my colleagues across the embassy to continuing our work together to help build that future Afghanistan.  Besyar tashakor, menana (Thank you, Thank you)